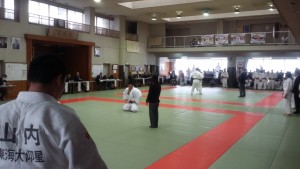 Batsugun is a form of judo competition, usually used for dan grading tournaments.

The players are divided in two groups, one of them wears “red” and the other one “white” team.

Then they start competing against each other.

In order to be promoted to the next grade, one have to beat 3- 6 competitors in a row, depending on the format.

Here are some short videos of Batsugun grading tournament from last Sunday in Osaka.